Our first collaboration with Netflix in Mumbai

The Hollywood Reporter wrote about it here.

We have opened our call for application for our upcoming annual project-based workshop which will take place in Bucharest, Romania between the 28th November and 3rd December 2019.

You will learn how to incorporate post-production and VFX in your project from the start. We cover all crucial components – from budget and planning to creative and technical aspects. The goal: to end up with the skills necessary to avoid any bottlenecks in planning and budgeting, and to become capable of having eye-level discussions with all parties involved in the post-production of your future films and series.

The workshop also addresses what it takes to deliver a production to the international market.
Subjects include: post-production workflows, schedules, budgets and technical aspects as well as management of creative processes such as sound and VFX. The workshop is conducted in English, and consists of plenary sessions, individual coaching, and group work.

The 6-day workshop is open for:
• producers with an internationally co-produced feature film, documentary or TV-series in the stage of development, financing or pre-production, and
• post-production supervisors, working independently or with an organization.

For more information about our project-based workshop, read a blog about the Budapest workshop here. 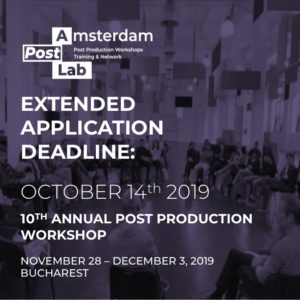 APostLab would be nowhere without its many passionate trainers that have taught, coached and shared their knowledge during the nine previous workshops, together with the workshop’s team. For our 10th edition in Bucharest we’re looking forward to welcome: 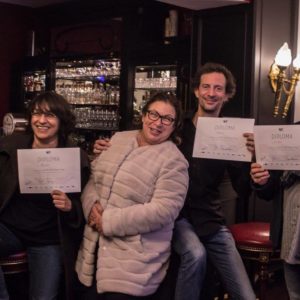 Post production workshop EP2C (European Post Production Connection) has changed its name to APostLab. The name change and new logo were presented at the workshop’s annual cocktail party during the 2018 edition of the Cannes Film festival.